There is a meme I put on my Pinterest. 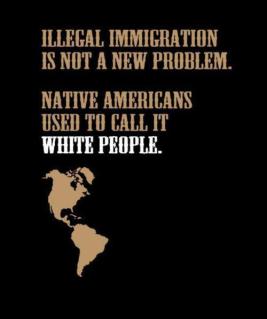 Underneath I wrote “and looked what happened to them…” That means, they were overtaken by a foreign culture and their way of life was obliterated. This poster supports tighter immigration laws, even if it doesn’t mean too.

Racist. The de-humanizer. The insult that ends the conversation. That puts a person on a desperate defensive. Like “pedophile,” “gay,” “communist,” and “witch.” Depending on what stretch of historic timeline you inhabit.

So let me make this easy. Let me say it in clean clear language.

I am racist. I see color. I note when someone is a different race than I am. When I met my yard guy Juan for the first time, I automatically spoke slow, easy English. I judged by his appearance, a ruddy dark complexion, work clothes, and of course, him being Mexican, that he may not speak it well. He does not. Though considerably better than I speak Spanish.

But wait. I’m also sexist. If I need help in a public place I usually try to find a woman first, because I think they will be nicer and more patient. And I would want a male fireman to rescue me, (though I certainly wouldn’t fight off anyone who was trying.)

Class-ist, too. I like well-dressed people with good carriage. Even though I am usually not one of them.

Revisionist also, don’t forget. I am suspicious whenever history labels good guys and bad guys, because history is never, ever like that. I don’t believe white people are bad and though we should learn from history, I don’t believe the past should be judged by the rules of the present.

I am prejudiced. In a thousand ways. I judge on education, appearance, speech, dress, age. Mostly because that information is the first I receive when I meet someone. I form my initial impression, and alter it as necessary. People do that to me, too. I make a terrible first impression. I have chronic bitch-face, am fat, talk funny, and have no table manners. C’est la vie. If they stick around they usually change their minds.

I am a tangle of flaws and bigotry and judgments and insecurities. Some of my prejudices are warranted by repeated reinforcement, some I designed myself from whole cloth, based on maybe a single experience or gossip or an article in the paper. And when I get new information, I  change those prejudices. For instance, I will never judge a mother with a screaming child again. Ever.

So that’s me. Dreadfully flawed. I am all those things you accuse me of and so much more.

And I don’t believe for a second that I’m the only one.