Every summer I sit in the damp heat of the glassed in “Parent Aquarium” at the University’s pool and watch my daughter learn to swim. This year, as I was signing her up at the Fitness Center, I couldn’t stop looking at their rock wall. Brand new, forty feet high, weird little pockets and pinches of colored rubber; it was beautiful.

My kid is a monkey. “Do you have kid’s lessons for rock climbing?” I asked. And I made the spur of the moment decision to sign her up. Even though it meant I would now be spending two hours in that muggy building, alternately yelling encouragement and scowling at my cell phone. But hey, she’s my monkey.

We arrived the first day of lessons, my daughter ready to tear the place up. I saw down on the couches facing the rock wall, sugar-free vanilla iced coffee from Mcdonalds at the ready, cell phone queued up to a book about Oscar Wilde’s wife Constance, and how she dealt with all the sodomy and infamy and whatnot. I kicked off my shoes and was all ready to shout half-focused praise.

“Okay parents!” shouted the 20 year old boy who taught the class. “Let’s get you harnessed up!!”

I wish I could have seen my own face. The complexity of emotions…had you been able to capture it in sculpture it would be in the Louvre. Shock of course. Confusion: the certainty that I had misheard. Despair. And blind panic. Get off this couch and scuttle as far away as your short chubby legs can take you. Uh uh. No. I paid my dues. I took a 11 years of PE classes. I’ve been mocked and tormented by children of every age and ignored by teachers and single-handedly made whole teams of kids LOSE games because I was slow and fat and have hands and legs and fingers that do not do what their brain asks. This is not fair. NO!

“It was in the course description,” an sturdy, outdoorsy mother said to me when I said I hadn’t realized parents were involved. “Climber and ME?”

“I thought it was just an expression!” I snapped at her. Actually I had no idea of the class name. I didn’t pick it from the course catalog. I just signed up for it at the front desk.

They gave the same frickin’ harnesses to the seven year olds and their mothers. And it wasn’t a problem for the other mothers!! Because women whose thighs are only slightly larger than their children’s are the kind of people who take rock climbing classes! Not people like me.

“This probably isn’t going to happen,” I told Instructor Nick as he did some inscrutable sleight of hand to change the width of the many circles of nylon I’d have to wrap around my thighs, waist and belly.

“No, no…they stretch!” he said cheerfully.

I am fat because my lifestyle, mentality, and yes, genetics are conducive to it. The things I like to do are sit-down things, mostly. And the foods I like best are quickly made, often rich and sweet, usually. I despise feeling uncomfortable, even when it’s good for me. For me, right now, being fat is a lifestyle choice that I’m not embarrassed about. It does not much impede me, when I’m left to my own devices. I forget that it CAN get in the way. It was literally in the way that day.

I have taken a personal oath never to be sheepish or derogatory about being fat, never to silently beg that no one notices my condition, and never to avoid talking about it when it is pertinent. The other people in the room hadn’t taken any such oath and all diverted their eyes while I wiggled and yanked that fucking harness as high as it would go, which was only to the top of my pubic bone. It was buckled, but I couldn’t not see the clips and karabiners and knots from where they nestled tight under my belly.

Sweating, I repeated, “This probably isn’t going to happen.”

The parent’s job wasn’t to climb. It was just to “belay,” which I now know means “hold the rope so that if your kid falls you can’t sue as easily.” And it’s not just holding the rope, it involves a special relay of physical movements involving dominant hands and rhythmic positioning and….well a bunch of other crap I’m bad at.

Also I’m left handed so all of this is backwards.

I wore that tourniquet of a harness, an umbilical between me and my happy daughter, the whole lesson. I shook and sweated, I tried to think of who I could hire to take my place, until that made me ashamed of myself. My mom never refused a field trip hike or bike ride or a swim in the lake with me just cuz SHE was fat. I began to notice how hard LE was tackling that wall. I started shouting the color of the next pocket she should put her foot on.  LE did good that first day.

I huffed up to Instructor Nick after LE was unharnessed.

“Two things. I need a bigger harness tomorrow. I need you to reteach me everything you taught me today because I don’t understand hand-eye stuff well. And I need you to get this damn thing off me because I can’t find the buckles.” That was three things, I guess.

I got the bigger harness, and kept relearning the hand work. Thursday, during her fourth lesson, my seven year old daughter climbed, inch by inch and foot by foot, the entire height of the university’s 40 foot climbing wall. A wall built for college kids at the peak of their physical boldness. My 50lb daughter scrabbled up that wall like a chirpy little spider, running her mouth the whole way and fearlessly taking dangling rests three stories off the ground in complete trust that her mama would keep her safe on the other end. She did it. I got to be part of it. 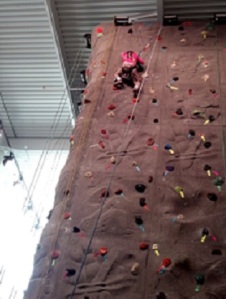 You can’t expect your kid to have courage and withstand healthy discomfort if you don’t model it. Dammit.

This is going to happen. A lot.