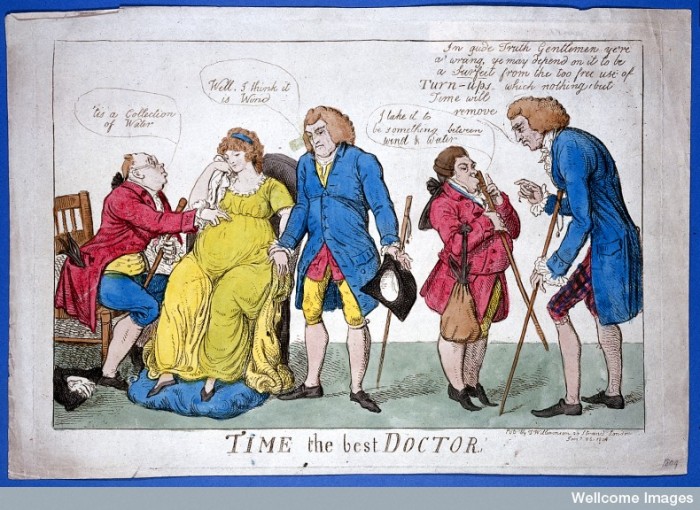 “A group of physicians wrongly diagnosing the case of a pregnant woman. Coloured etching by I. Cruikshank, 1803.”

I hate it when I have a great idea but none of my usual editors want it. This happens a lot. “No, we’re not going to publish all that advice you found where Dear Abby tells mid-century women that they LIKED being hit.” or “Our readers aren’t really looking to be confronted with a think piece about the hygienic implications of menstrual art.” And so forth.

And I know without asking none of them are gonna touch this AMAZING collection of birthing images I’ve accumulated. They are mostly sourced from the Wellcome Museum and The British Musem…if you want to liven up your Pinterest you should check out those sites. Abortion pills used to (exist, and) be chocolate covered.

So here, all on my own. Some images are very graphic. But so is childbirth. I hope you like this.

First, a little history of the Cesarean Section 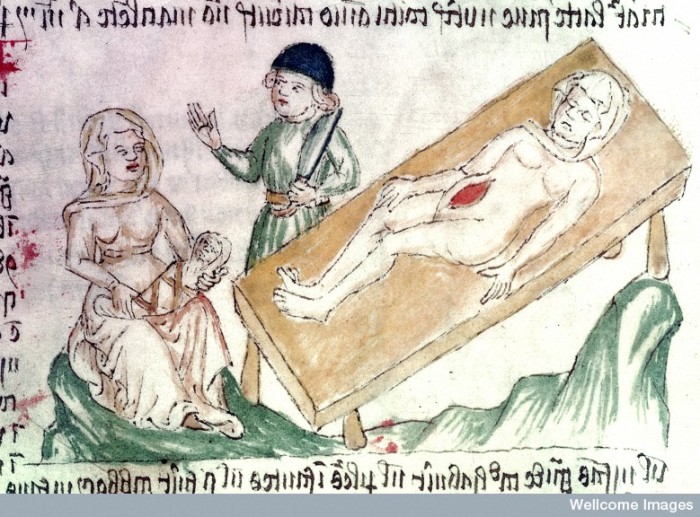 This is from a gynecological text dated around 1430. Cesareans were then only preformed on women who died in childbirth. The picture shows the pale bloodless mother on operating table, with doctor holding knife after delivering baby by Cesarean, and a nurse holding swaddled child.

This knife is similar to one such a doctor would have used.

C-Section in medical text, 1864. By then they were just starting to attempt live C-section births. The advent of ether is probably to thank for that.

Ancient Roman relief carving of a midwife delivering baby. I love this relief. It’s probably 2000 years old, well detailed, and reinforces the idea that this process has been happening just the same way for everyone, everywhere, always. I get a kick out of that human continuity.

The birth of Henri IV at the castle of Pau. By Eugène-François-Marie-Joseph Devéria. It was common for a queen to give birth in a room crowded full of spectators, especially among the French. Marie Antoinette is said to have fainted dead away from the shame of it. I don’t know if they felt there had to be indisputable witness to the royal line or… that’s just French for FUN. I’ve seen some of their comedies. They’re some weird-ass Gallo-Romans, yo. What’s with the creepy little guys next to the dog? 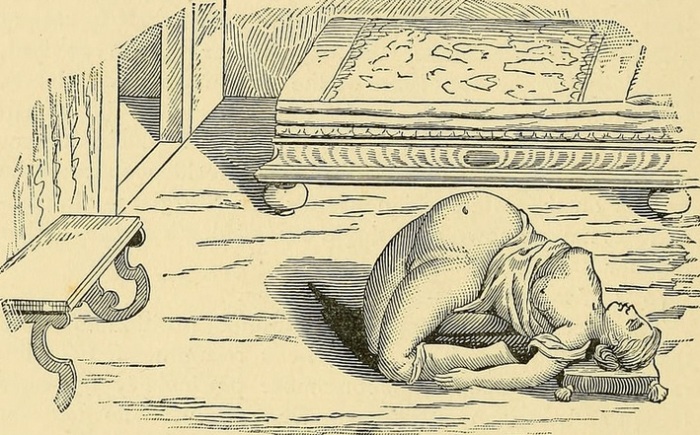 And from France we move to Italy, where, according to the 1883 source text, this is the birthing position that should be assumed by “very fat women!” As a fat woman myself I applaud my ancient Italian sisters for being able to fold up into a position that only the lankiest yoga teachers could normally achieve, while in labor. Huzzah.

A foldable and adjustable birthing chair- Late 17th Century. Utter work of art. Note the gripping handles. Add a few waterproof cushions and many a woman would love to achieve parturition in this beauty.

Victorian decorum must be observed. Even if it means a physician’s exam is indistinguishable from a clumsy backseat groping. Sight, gentlemen, is becoming one of the more popular of the five senses when concerning medical practice.

I think this woman is pretty awesome for keeping her tiara and ballgown on for this exam. Look at that face. “No I’m not embarrassed! I got some first rate junk down there.” 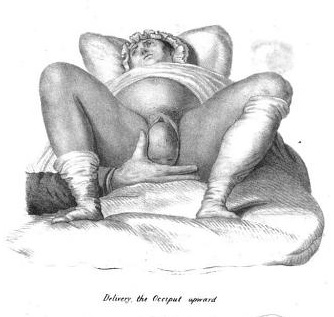 A medical text illustration of an upward delivery. The time-waste of which seems to really be frustrating to the patient. “Hurry this up please. That hog ain’t gonna butcher itself.” 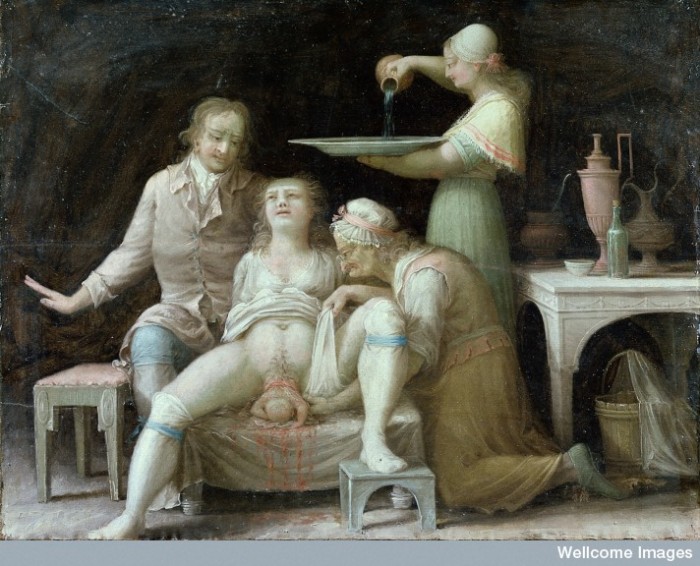 The most graphic, honest, and most intriguing depiction of birth in my collection. The image of Hygiene is particularly eye-catching; she somehow centers the scene even more than the birth does. Beautiful. From the Wellcome Museum description: “A birth-scene. Oil painting by a French (?) painter, Åbo, Sweden (later Turku, Finland), 1800.
“The proud father is on the left, the woman giving birth is in the centre, and on the right is a caricature of a midwife or wisewoman. The standing figure pouring water into a bowl may be a personification of Hygiene, as a similar figure appears on a Wedgwood plaque of the goddess Hygieia. At the same time she is the maid who is preparing to wash the baby.”

One thought on “Shocking Images of Nude People-Pushing.”