Barb and Mr. Barb (in two years, I’ve never heard his name) have been good neighbors. They made peace with our dogs and children and the constant brutal cacophony of “memories being made” and “vengeance being wrought on the weak” that comes constantly from our side of the fence. Mr. Barb doesn’t talk except the explosions of swears that time (well, fourth time) our German Shepherd dug into his yard.

But that he kept the F bombs down that long speaks well to his character.

We were the first “young family” to buy a house in this neighborhood since it was built in the mid-sixties. The houses are old suburban-grand, heavy and wide, with yards old enough to support healthy sequoias and laurel bushes grown tall and twisted enough to meet their bows.

My best friend, who is a jaded and artistic man, says pictures he receives of my home life are a mixture of Andrew Wyeth crossed with a Diane Arbus. Which is very flattering and quite spot on. 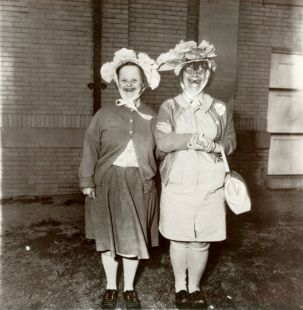 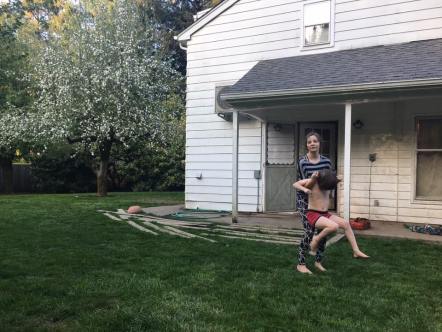 I have not left the house since March 9th, except twice to drive my kids to the woods so that they might stand looking cold and put-out in a more natural environment than our yard, and the three times late at night to look for my dogs because animals hate quarantine also. I succeeded once. The police where very nice the other times. Interesting note, the soil under a 60 yr old sequoia is very pillowy and light, being mostly made from old pine needles. Not pine. Pine? You know what I mean.

I spent a few days of preparation in the back yard… mostly me laying a dirty Pendelton towel on the mud-soft grass, wiggling my legs in the air and shouting “MOUNTAIN POSE! WARRIOR POSE! HALF MOON DOWNWARD CORPSE POSE!” and other faintly remembered yoga terms from the required PE credit I took in college. I swigged a caffeine shot, put on my teal Plus Petite Half Off Clearance Price Blowout Woman Within “yoga” pants…and the pink “running” shoes I bought at same sale…they are striped and wide and made of mesh…I went on a walk.

Now turn up your filters ’til you can really SEE that teal. Cuz it’s so so SO TEAL. (Bonus, window overlooking Barb’s yard!)

Leaving the house caused a fracas. They all wanted to come. I should be grateful. Family…and…all that wholesome…yeah.

It’s just that, alone, I’m a tubby lady in teal stretch pants perambulating. With the rest of my household I’m the caboose of a frickin’ gypsy caravan. The kind townsfolk would tell to move along while holding pitchforks. I explained “I’m doing this because I haven’t been moving for months and my back is starting to seize up when I go further from my bed than the place I hide my chocolate from you guys. I’m not telling you where but you can bet it’s very close. So I’m just going down the street.”

They were desperate to get out. To have a purpose.

My son put on the clothes I’d devested him of earlier that day as a statement of intent that he WOULD take a bath. I’m not allowed to bathe him anymore -he asserts his right as an autonomous human to pick which family member creeps on him while he’s naked and soapy and I am last on his list. His teenage sister is ahead of me. He’d rather be licked clean by the Chi-zu. My constant refrain “Scrub between your butt cheeks for REAL, Jack” will be something he rises sweaty from in a nightmare 30 years from now.

So back went on the stained and tattered jeans, the robot shirt he’s slept in for three days.

My daughter isolates in place while in place.

My daughter was freshly showered and in a new nightshirt, for these are days of such things. To this she added an enormous Slanket creation, and thick white geriatric tennis shoes, peeling veneer and toothless Velcro no impediment. Gus..ehh he’s fine. He still goes out and thus is ready for excursions. He did run back twice through, like the original housewife of this home might have done in the 1960s, worrying that the dogs might escape again through an open door, or eat the Oreos left on the counter.

And not one person sustained eye contact with us.

And that is how today I realized we’re “That Family” in our regal old part of town.

And we DESERVE it.

By the corner fire hydrant Jack shouted in his Minionese patter, “I got the lead on this, guys,” which his sister disagreed with by planting a huge hand (seriously huge hand for a 13 year old girl) directly on top his skull and yanking backward. He squeals like a dying rabbit being chomped by a dying piglet? But so much louder. She finds new ways to cause him to make that horrifying noise every day. At least four new ones on that walk alone.

Initially I try to offset this behavior by loudly observing “THESE GARDENS LOOK SO HEALTHY AND WELL KEPT!” as we wheezed and rattled past the well-to-do retirees in sun hats and matching gloves. The walk is not easy on me, my body is a sloppy affair, muscles bunched and bones moping. I have teal pants. Have I mentioned the pants? That are teal?

Jack falls face first in dramatic repose on the corner of a well trimmed lawn and my immediate, pinched nerve snap of:

“HEY! Get up right now! No turds are to be left on the grass!” morphs into a pleading “HEY…don’t be turrrrkeys…guys.”

Meanwhile my son decides to walk the journey with his eyes closed as a personal fitness goal. My daughter keeps running in different directions to check all license plates in the vicinity, because some number combinations allow her to come screaming back and punch her father twice on the arm.

And I begin to shout…it’s just not worth the effort to both walk and appear to be one of the Nice Sort. Turkey becomes turd. Pleads become threats. Threats become close-leaning toward small ears whispering of terrors to come.

We trundle into our cul-de-sac while the couple next door leave it. They are young and beautiful and they are renting. Their dog, clean and not the sort to crap in the kitchen, seems willing to make friends when Jack chirps “Hey Dog-guy!” but the couple walk on with eyes harshly averted. I consider being offended, but wait…for two years I’ve been meaning to check how much of me can be seen when I’m on the toilet from their house…the bathroom has no fan so I always keep the window cracked a couple inches. So perhaps they have every right to feel uncomfortable.

Barb,  I told early on, “I noticed the sun never shines directly into my office, so…I’m not gonna bother with curtains. Funny thing is I don’t always bother with clothes tho, so, heads up!” Ha ha but seriously…seriously Barb.

She made a dismissing wave. “That’s fine. He (Husband Name Withheld) used to sunbathe naked in the back yard.”

“That’s neat!” I said. Eighty year old fellas should be able to happily air their junk in their own backyards, I think. None of my kid’s windows overlook their yard anyway, just the office I will be stumbling naked into over the next few decades.

“No.” Barb is kind but suffers no nonsense. “No I put a stop to that.”

Turns out you coulda have let him, I think, Barb. The neighborhood’s going downhill. 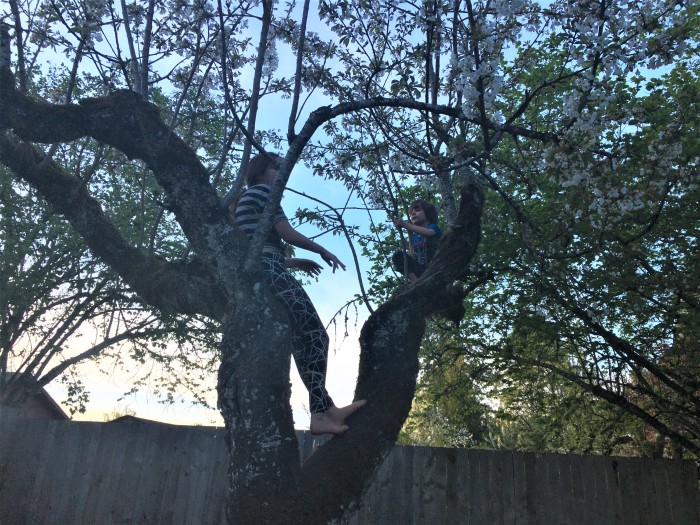 One thought on “We Are Teal”